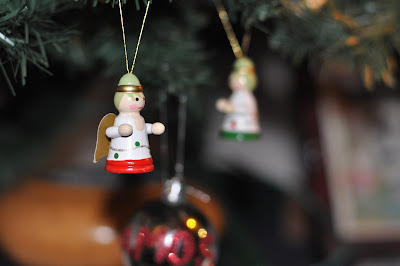 Santa chastises a wooden angel. He is held in one hand and the angel in the other. They tip and rock, back and forth in small hands, talking at each other. Who will stop and listen? Later, the pair are driven in a truck, right across the lounge room, parked next to the bookshelf. They lie awkwardly on their backs, staring at the ceiling.

The laden tree is a cast of characters for a three year old's imagined dramas. They migrate down from their perches, clutched in tiny fingers, and come to life.

It was hot the day we pulled Christmas out of hibernation and I was grumpy. Concentrating on untangling was an excuse to say little. A martyred attempt to stop myself from smothering the Christmas cheer. Twining tinsel round the bunk bed ladders was mindful, too, and I let myself get a little infected by the spirit. Just a little.

The children, the angels, the tiny gruff santa were Christmas. And I can resent Christmas. It's insistence, it's relentlessness, it's demands for peace and goodwill, and family and giving. I am selfish and ornamental and I hang from the tree of life with rigid thrust-out arms, a painted on halo and bizarre green hair. I am stubbornly stuck with the same smile on my face, year after year, as I am taken out of the box, dusted off and suspended by the string in my head.

The children, the angels, the tiny gruff santa are the today of a two thousand year old story. The flesh of a God who refused to leave us alone. The ornaments that remind us of a squalling child in a dirty barn, and the inconvenience of life. The ephemeral enticement of selfishness.

Christmas decorations at the shops are just window dressing, but these ornaments are part of the family, joining us again and again. They've been battered and broken by the laying out, the imaginary play and the packing up. They are family. They know last year's secrets and they've heard our prayers as we whisper them each evening in December. They witness to the miracle of Christmas. They've seen grace enter into my stubborn, grumpy heart. Year after year. 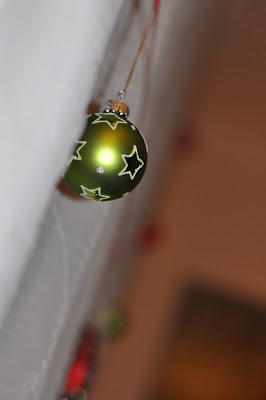 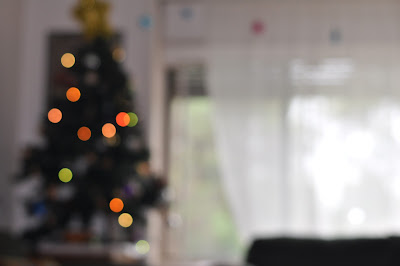 Amber has suggested writing on a concrete word - using it to flesh out the abstract. The Abstractions in December begin with The Ornament.
Posted by Kath at 12:32 AM

Oh how I feel you here. I unpacked the boxes in such an ugly mood, so obliged, but here this last week, I've felt it creep over me, the gladness of it all.

Thank you so much for these words.

LOVE this. You had me at 'Santa chastises an angel.' I love the way you play with the images so effortlessly - and this is it, utterly, the tension of Christmas, the stuck on smiles. Just- brilliant. Loving your concrete words today, friend!

Hi Kath
Yes, you nailed a loose nail right on its head. When did the wonder of Xmas been replaced by enthusiasm worked up by many playing on the sentiments of people to make money!? I don't know, but I am glad I am not the only one who longs for the simplicity of just a stable.
Your words gripped my heart like all your posts.
Thank you
Mia

Lovely writing. Thank you for the gift of your words.

Whoa. This is powerful writing. So glad to have found you through Amber's today. I appreciated your honest, vivid, real and in the end hopeful expression here. Thank you.

This is so profound. I am grateful to find you and your heart, your words at Ambers. Your authenticity and honesty breathe fresh life into these days of Advent. I want to stay rooted and grounded in all the rhythm of the season with my disposition and my soul fully joyful and celebratory but.... our flesh and our humanness come screaming through. Grace and mercy from Him save. I so look forward to more of your words. You bless me this morning with these.

"They know last years secrets and they hear our prayers."
I loved all of this. Truly fun to read. Great to be here today from Amber's. :)