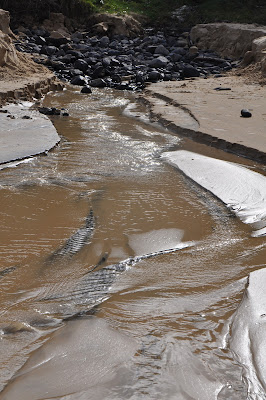 We always laugh at Wesley in The Princess Bride, "Life is pain, Highness. Anyone who says differently is selling something." Buddhist rhetoric buried in a fairy tale.

No one wants to have pain. It's uncomfortable, distracting and makes most of us feel miserable. Chronic pain can lead to depression and stops many people from working.

No wonder we fight it. Or numb it. Or try to forget it. We're desperate to escape it.

What if it's all the fighting and avoidance that makes pain unbearable?

The third wave of behavioural therapies advocate accepting, rather than fighting, pain. A paradox is emerging. That softening our approach to pain, entering into pain is a step towards lessening it.

Does chronic or repeated pain make you feel tense or upset? Do you fight it?
Try an experiment next time. Instead of becoming distressed, notice it and accept it. Turn it over in your mind and describe it to yourself. Rest in it. Do a careful scan of your body, noting where there is pain and where there is no pain. Don't judge it, just focus your awareness on it.

Sometimes I forget the mess we are in. Dinner turns out well, or Simon kicks a goal at soccer, or we have a fun Saturday night with friends.

Strange how insular I am. How inward-looking.

Then I see a woman who cannot breathe as she cries for her murdered son. And another who believes she can never recover from abandonment and loss. I read a prayer message about an under-thriving baby who probably has fetal alchohol syndrome. And...(insert your example here)

We are torn by our natural hostility to God. And nothing I do can protect me from the ugly possibility of this world. Nothing I do can make me pure, or holy, or wise or truly kind.

Paul carves it in rock here. He needs to shock us, so we stop trusting we can be good enough. We just can't. Human nature is hostile to God - it fights and resists him, it undermines him and lies about him. It struggles to even know what is right, and then forgets to do it.

That's my human nature, my heart - I struggle to know right. I often forget to do it. Sometimes I even decide not to do it. I didn't drink so much that my baby will struggle through life, but I am so enthralled with my own needs that my children have to shout for my attention, and my husband sometimes doubts that I care for him.


For the sinful nature is always hostile to God. It never did obey God’s laws, and it never will. That’s why those who are still under the control of their sinful nature can never please God.

"Humility is the noble choice to forgo your status, deploy your resources or use your influence for the good of others before yourself.


More simply, you could say﻿


the humble person is marked by a willingness to hold power in service of others." Humilitas, page 24.

This is John Dickson's definition of humility, in his recent book, which aims to explore the ancient meanings of humility and it's role today. It was transformed from it's roots in humiliation, an imposition, to a loftier virtue springing out of choice.

Dickson gives many examples of great or famous people who have lead with humility. They are people who have no need to boast or to remind others of their power, instead they act graciously to everyone. Despite insisting he has few credentials to teach on leadership, John Dickson has provided a really clear exposition of the role of humility in good leadership. Perhaps my own ignorance of the leadership literature is evident in this comment. But what more can I say other than I learnt something and that there is a level of scholarship and understanding which is needed to explain concepts simply. John Dickson has that gift.

I wondered if the book was an attempt to sell humility by explaining its value - ie. it makes a good leader into a great leader, so if you're keen on being a great leader, get some humility. Despite the history of bad press, there's some evidence it is the secret behind some business success stories.

There is an uncomfortable tension about finding the reason for humility in greater achievement. I think it discounts the value of humility in small communities and in relative obscurity. It buys into the myth that true human value is found in fame and world-renowned attainment. I've reminded myself before that there is value in living a quiet life and that being seen by the one who sees everything is what matters. What is the value of famous leader humilitas to me? Of course that is a caricature, but it is a possible end-point of this book. And perhaps it is the danger of concentrating on the powerful to explore humility.

Having said that, there is no simple way to explain humility, without encountering paradox. The biblical archetype of humility is Jesus. He began this humility paradigm shift from humiliation to the choice of power surrendered in humility. He is the most powerful being we can imagine, and yet he suffered degradation and was murdered. He never doubted his purpose or his mission, and yet he wept in pain. He rebuked people who got it wrong, but forgave sinners.

And I like John Dickson's upfront way of acknowledging the paradox. He's right, the idea of writing a book on humility and holding oneself up as an authority on it is a little ridiculous. But he tackles that one in the introduction, and aligns himself among us - the ones who struggle to grasp the wind. True humility is elusive and fleeting, and difficult to pursue without running right past it. I believe it is found in seeking to serve others rather than in seeking to be humble.

Let's not mention the death thing

Death lurks. We'd better not talk about it, because we can't escape superstition. And nobody wants to remember that we're all headed there one day.

Dig right down to the heart of the process and find that death comes from one thing - turning away from God. Sin. I am so humanly trapped in it that my mind is utterly controlled. My brain is washed in it. My heart pumps it out around my body and each contraction poisons me.

And in the midst of this stupor, I think that life is a new iPad, or being liked by my friends more, or not failing, or getting more hits on my blog.

The only remedy is the breath that brings life - the spirit of Jesus soaking my mind, rushing in my heart and veins. Who knew that life and peace were to be found in giving control rather than taking it?

Don't we all hunger for life, for peace?