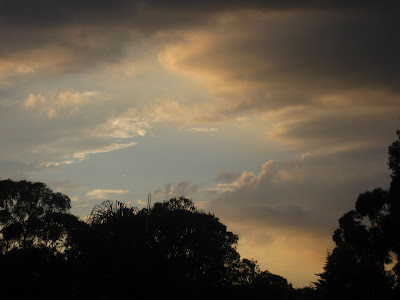 Bulletins throughout the day. My mouth is open as I watch the film of water washing a landscape away.

Cameras, a microphone in hand, he asks the questions to a woman lost and bereft. She's living in her car - a shiny red one, small Japanese made. She's living in a car because her home was dashed and murky water crashed. Her neighbours buried under rubble.

She's perplexed and uncertain. Shocked that she's here and breathing. Longing for the normality of casual hellos at the letterbox. Scooping rice into a bowl in the kitchen. Watching TV sprawled on the sofa after work. None of these can happen - she has no bowls, no kitchen, no TV, no sofa. Just an all-leather interior and a clutched handbag.

Was she good TV because she coud speak English? The street behind her is deserted, but the microphone is big and blue, catching her words. Utterly shaken and overwhelmed. But somehow saying that she will go on. What else can she do?

I watch pictures of destruction. Talk of nuclear reactors leaking contamination. And I am overwhelmed. Simply overwhelmed. People tweet #prayforjapan and I do, but will it help?

And I know that it will.
May the bereft people of Japan find refuge.


God is a safe place to hide, ready to help when we need him.
We stand fearless at the cliff-edge of doom, courageous in seastorm and earthquake,
Before the rush and roar of oceans, the tremors that shift mountains.
Psalm 46:1-3 (The Message)
Posted by Kath at 10:51 PM