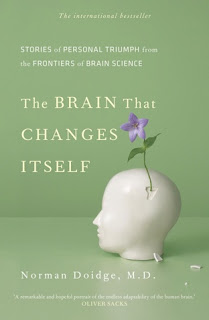 'Neuroplasticity' is a bit of a buzzword at the moment. Norman Doidge, a North American (Canadian, I think) psychiatrist, has written this book about the development of neuroplasticity as an idea and a basis for treatment in a variety of neurological and psychiatric disorders.

He shares a number of amazing and inspiring stories about recovery from brain injury, congenital brain abnormalities, from obsessions and childhood trauma. The book is interesting and engaging and definitely worth reading.

Until recently, it was generally believed that the brain carried out its various functions in specifically localised areas, and that damage to an area resulted in loss of function, never to be regained. Evidence is mounting that this view is simplistic and that our brains are much more sophisticated in their response to damage or injury.

Contrary to the idea that adult brains are static, people have been retrained in lost function despite permanent brain tissue damage. Other neuronal networks develop the ability to take over the functions of damaged neurons. Damage to neurons stimulates the production of hormones which catalyse the formation of new networks and pathways.

One of the interesting ideas which Doidge proposes is that our brains delight in learning new things. He goes so far as to say that if our brains lack novelty then we begin to become restless. Delight, enjoyment, love, pleasure all stimulate dopamine in the brain. (The dopamine reward pathway in the pre-frontal cortex is thought to mediate addiction.) We can become tolerant to dopamine stimulation and novelty will renew the 'buzz' and enjoyment.

'We must be learning if we are to feel fully alive, and when life, or love, becomes too predictable and it seems like there is little left to learn, we become restless - a protest, perhaps, of the plastic brain when it can no longer perform its essential task.' (p116).

So, learning new skills and concepts is a way to maintain brain stimulation and protect against the pitfalls of plasticity. Doidge 's illustration is of a skier going down a new slope. The first run will create a new path, but as that path is used a number of times, it begins to direct the skier in that path and it is more difficult to divert to an alternate path. Plasticity gives us the ability to create new paths, but can also bind us tightly into faulty pathways, which become tricky to evade.

These are just a couple of ideas from the book. It is worth reading more, especially because of Doidge's readable, informative style.
Posted by Kath at 10:16 PM

I'm a big fan of Doidge's book. It's a meticulously researched and comprehensive look at the new science of the brain. The scientists he features overturn decades of dogma about a fixed, unchanging brain. Great stuff!

Since the book came out, new research even shows that we can train our brain to make ourselves more intelligent. (This report was published in the Proceedings of the National Academy of Sciences in 2008 "Improving Fluid Intelligence with Training on Working Memory.")