Conversation over a haircut 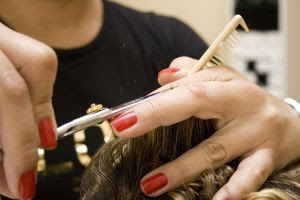 I made one of my infrequent visits to the hairdresser. She's pleasant to chat with, and accepting of my lassez faire, low maintenance attitude to hair. My ignorance of product. We compare stories of my children and her grandchildren. I update her about work and it starts her talking about refugees and migration.

Politics and religion. And immigration. #thingswedon'ttalkabout

She tells stories of people she knows from other cultures - all friends, all sympathetic portraits.

Then asks my opinion about refugees. And Islam and fundamentalism and burqas. She took my hesitation as an invitation for her opinions. No worries, I can do listening.

Deep down, it's fear. Fear that refugees are extremists in disguise, that they'll get powerful before we realise it and they'll rip us all off by defrauding Centrelink. That burqas hide disdain and contempt for us. That refugees are different, they're not us and we might not like living next door to them.

I preferred her stories of people she's really met.

But sitting in her space, I found it hard to collect a coherent response. Since than I've formed a few ideas, but it's a long time till my next haircut.

I want to tell her about most of the refugees I've met. That they've been victims of religious persecution rather than perpetrators. That they don't want to leave their home country, they have to. In order to survive. That they spend months, years, days on end, mourning and missing their homes. Grieving the wives or children or siblings who were killed. Trying to forget the wounds they've received or the horror-filled memories seared into their brains.

That most of the Arabic speakers I've met are from Christian minority groups, and that the Iranians are those who have protested the Islamic state. That the idea of refugees promoting fundamentalism, or racial hatred when they bear its scars is oddly ridiculous.

That when she talks of pride in Australia and protecting our Australia, maybe the pride and the protecting rob of us the opportunity to be a nation of strength of character and true compassion.

So much of people's response to the immigration question is based on fear and ignorance. Instead of fearing and disdaining the refugee family next door, why not try to get to know them, learn how they live and think?
Most of us are descendants of immigrants, most of whom came to their new country just seeking a better life.

People everywhere and in any setting are fundamentally all the same -- sinners in need of a Savior. One on one, that's so much easier to recognize than when we make sweeping generalizations about large groups of people we've never met. Great post!
Thanks so much for visiting and commenting on Saved by Grace!
Your blog is a blessing and I am now following it, and I invite you to follow Saved by Grace also:
http://savedbygracebiblestudy.blogspot.com/
Love in Him,
Laurie Collett