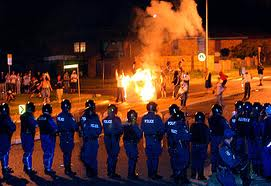 Macquarie Fields riots from heraldsun.com.au
Riots in Britain. About a day later, the radio news became more than just background noise. There are riots in Britain. Remember our riots?

It made me think about people living trapped by hopelessness. I read a book that tried to understand the poor, and it still felt like just another judgement. But at least the writer had met the people he described. It is easy to have an opinion about poverty and the poor, but some of the loudest opinions are made without meeting anyone who is poor.

Laurie Penny wrote an insightful piece about the riots and the media attention they have garnered. Peaceful protests have been ignored, but the media can't get enough of riots and looters. And we love simple explanations like - 'a small group of criminals are making everyone else look bad', or 'Twitter is the reason for the spread of violence'.

This extract from Penny's blog is telling,

'In one NBC report, a young man in Tottenham was asked if rioting really achieved anything:


"Yes," said the young man. "You wouldn't be talking to me now if we didn't riot, would you?"
"Two months ago we marched to Scotland Yard, more than 2,000 of us, all blacks, and it was peaceful and calm and you know what? Not a word in the press. Last night a bit of rioting and looting and look around you."
Eavesdropping from among the onlookers, I looked around. A dozen TV crews and newspaper reporters interviewing the young men everywhere ‘’’

What sort of behaviour does media attention reinforce? Perhaps those who feel powerless and ignored will try anything to be heard.