Not at my House 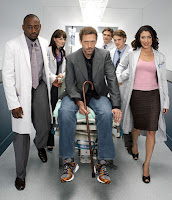 Last night I sat up and watched 'The Good Wife', legal drama with a bit of political intrigue rolled in. It was easy viewing, but I fell into the trap of not turning off at the credits, so ended up watching 'House' as well.

I haven't watched it for ages, and I will never watch it again. I remember, now, why I stopped watching at the end of season 1. I won't mention the fact that the way he tortures patients as the result of his clumsy guess work makes me squirm.

His behaviour at work is harassment. His treatment of patients is dismissive and bordering on negligent.

Last night I finished watching the show with a bad taste in my mouth and felt sad for the broken relationships and hurt people in it. The worst thing is that I was just glad to leave and not have to return. That place is bad news.

I would like to say that I could find compassion for House and that I'd want to help him. I try to imagine being in a room with him and all I can think of doing is leaving or giving him a good telling off. He is a very nasty man. I actually don't know if anyone could be as persistently nasty and self-absorbed as him.

I would like to find a moral point - something about we are all lost or that Jesus can love anyone etc. etc. However he is just a TV character and I think he is written nasty for effect. In fact his nastiness is like the unresolved romance of other long-running shows. The writers can't resolve or develop the tension for fear of losing their audience. So House stays nasty because it maintains the dramatic tension.

I am sick of nasty House. He is unbearable to watch and the people who put up with his shenanigans are just as lost as he is. I don't like being in the same room with them. So I won't.