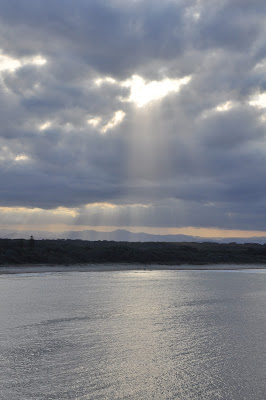 There are words made specially for theology textbooks. People polish them and bring them out on silver platters for special occasions - when they want to look smart in a debate or prove they know lots of stuff.

Then there was the time someone talked about courage and introduced me to imputed.

I've read the story of David and Goliath before. I've taught it in Sunday School. I've heard other sermons on it. You probably know it, too.

Consider who you identify with in the story.

David arrives in the midst of frightened Israelites. No one wants to face the giant who never loses and so they all hang back. They discuss and ponder and plan and wait and in truth do nothing at all.

Young David doesn't understand the quandary. He just wants to get out there and finish it. They laugh at his innocent assertion that God is on their side. Of course it's not that simple. They know better than this naive young shepherd. This baby brother. Haven't we all thought better of our own opinion than our baby sibling's?

Alone he stands. Courageous. Trusting God to live up to his promise to rescue his people. Inflamed by the insults to his Protector God. Ready to kill the enemy.

Am I that little guy full of courage? Am I out there defeating giants in the power of the LORD? Is that the application?

I am the cowering, fearful Israelites. I am sitting in a tent, offering David my polished, paraded, unused armour. The protection he couldn't wear because he was immobile within it.

Perhaps I'm putting a pillow over my head so I don't hear Goliath killing him. Me of little faith. Perhaps I'm sipping a cocktail as we watch him skip out to face the warrior. Observer of the real combat. Perhaps my armour has immobilised me.

I have to get them to repeat the news that he killed the giant because I think I've misheard. He what?

Then we're celebrating victory - won by a barely-armed shepherd boy, who delineates our lack of faith and bravery, by using his raw, unpolished courage. By trusting God.

I am suddenly being rewarded for his courage. If courage were a blanket, an entire Israelite army snores beneath it that night. One man has the courage, but a nation is blessed by the victory.

David's courage is imputed to the Israelites.

It's not just a shepherd boy and a giant and an embarrassingly cowering army. Here's where it all leads. It's the one righteous man whose purity is the blanket. There's no cover for any of us to shelter under but, miraculously, his righteousness blanket stretches out for us.

I'm crawling under and it's folds seem boundless. This imputing is good because finally I'm covered. I can rest in its warmth and my struggle to make a blanket of righteousness for myself is over.

I never was any good at conjuring thick warmth out of tattered, transparent threads. You?

Am I ready to finally trust in the efforts of the innocent? To stop obfuscating and prevaricating and pontificating? To accept the victory won by someone else's righteousness?

To let it become mine and finally change me.