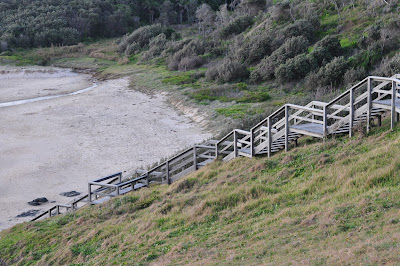 The funeral today was for a woman who has lived a faithful life. She has been having palliative treatment for cancer for six months and, four weeks ago, the funeral was for her husband. I can only imagine what it is like to see both your parents die within a month.

Her sister's husband looked stooped and worn today, his smile broad and sad-eyed. Her son's ex-wife will be more alone without her. She was praised by her doubting son for her faith in God and His love for her.

This family draws people from all through our community together. Gathered today, I saw the butcher who retired last year, the 'girls' from the chemist, people who've moved away from our church many years ago. They are well known for their extended family meals, their camping adventures and their loyalty. There's a prison officer who mows their lawn regularly because he remembers the years they let him live among their family.

The couple, who had been at our church for forty years, had loved many people, through youth groups and boys brigade, sporting teams and after school care, neighbourly love and inviting homeless young people into their family. They had seen the boom times and the broken times of our church and had served on, despite many people moving to bigger or newer churches.

They are well loved, because people had felt and seen the generosity of their love.

They were never celebrities and they lived a quiet life. They faced many hardships, losses and disappointments, particularly through chronic illness. But they didn't let those hard things shape them, they never became bitter or angry. Instead they continued to praise the God who loved them and to love people around them.

Sometimes I long to be recognised and for people to know the good I do. But that's not what a faithful life is about. I hesitate to start a heresy, but perhaps the most famous Christians are not necessarily the most faithful.

Kath, your words brought a tear to my eye as I read and remembered our beautiful friend. Yes, she was a faithful lady and that's about the best we could ever want. We will miss her so much and I wonder how the gap that they both leave will be filled. And yet, God's plan will become clearer and we can rely on that. We can pray that our parts in that plan will be made clear and that we can carry them out with love and joy. I think our recently-gone-home-friends would like that too. Thanks for your words. x Rosemary