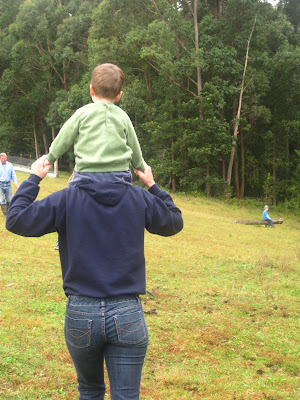 She's living at the house he bought. After the divorce. After winning a hundred thousand on a carelessly bought scratchie. He's had the house since half the money was in the till at the pub.

She's glad to have a place to stay. And doing her the favour eases the jagged edged fact that she is his carer. Not his carer on a welfare form. His carer on the watch for when he starts to be distracted with his own thoughts. Looking for his words to lose their distinct flavour. They can become like mist in the headlights.

He says there's nothing wrong. He lives it, too. If ignoring it were therapeutic, he'd be well. But he's not. He sifts everything he hears to capture words that make him better. But they don't. He careens, rather than slips into madness.

She came home to find the windows nailed shut and the back door couldn't open. He'd left the hunting knife on the table. The police had pulled him roughly out the door, with his arms clasped behind him. He hunted for explanation but it slipped away. She was saddened that he didn't notice his own incoherence. He thought it made sense.

She slept. It felt like days. Repaying the debt of pacing, interrupted nights. She tells me of retreating to her room. That she saw his eyes peering out from the darkness. That he waited for her to sleep and then he walked back and forth, all night. Wry, she laughs. His mad thoughts are funny. They are funny and timid and sad and broken.

Somehow she can shiver at his paranoid preparations and giggle at his oddness. Her steadiness is epic.

Family without burden is enticing. But it spoils us for the true beauty of care for a broken brother. Perfection has been smashed so that love can be glued patiently together. Built piece after piece, sturdily, secured one by one. It's a heroic, humble construction.

oh wow kath. this is so haunting and sad... this line: If ignoring it were therapeutic, he'd be well. brilliant.